To begin, remember one simple thing:  income is contagious.  The more income you make, the more you spend and, the more you spend, the more income those on the receiving end of your spending make.  In other words, income feeds off of income.  As we make more money, we buy more things, and this increase in demand increases prices.  As certain asset prices rise, such as our homes and our investment accounts, we feel wealthier and have increased borrowing capacity, and so the spending cycle continues. 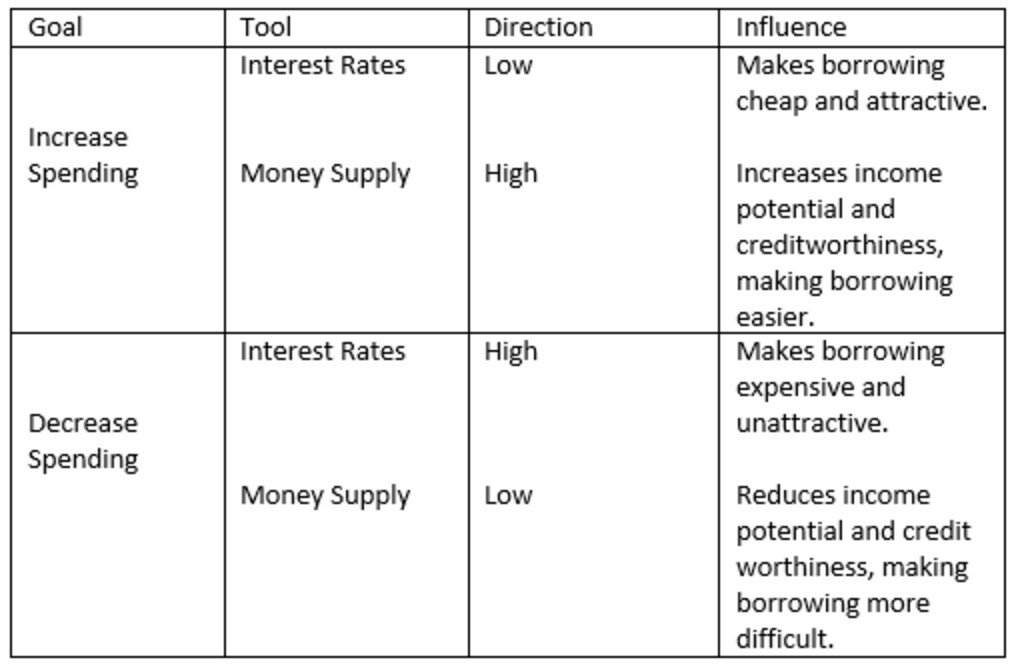 But, we don’t just spend our income.  No, no.  We also borrow money to spend more.  In fact, money spent using borrowed funds far exceeds that of traditional income, making credit one of the primary forces behind an economy’s ebbs and flows.  Cue the Federal Reserve and interest rates.  The central bank of the United States – the Federal Reserve – controls the amount of credit available to consumers and it has two tools with which to do so: interest rates and the money supply.  Interest rates set the cost for borrowing and the money supply affects the creditworthiness of potential borrowers.  Refer to the chart below for how these tools work.

While making more money and spending more money is good in theory, if there is too much money chasing too little goods and services, $1 will not stretch as far and becomes less valuable (think, inflation).

Over long periods of time, debt payments can begin to exceed income and an economy may go through a period of reducing debt (deleverage).  The most recent deleveraging in the U.S. occurred during the 2008 financial crisis.  There are really four ways to reduce debt, increasing income:

Each of these options has advantages and disadvantages, and there is no single silver bullet.  Ultimately, policy makers are tasked with determining the best blend of these options to return an economy to a healthy income and debt balance.  Kind of makes cleaning out your closet sound not so daunting, doesn’t it?