The North Pole wasn’t the only place wrapping over the weekend.  On Saturday, Republican leadership put the finishing touches on the reconciled Tax Cuts and Jobs Act for approval by President Trump (expected later in the week).  You are far from alone if you’re still trying to make sense of the current tax system while trying to digest the proposed changes.  To help, we have summarized key changes being checked twice by the President that are expected to affect individual taxpayers next year.   Know that the tax changes reviewed here are all temporary and sunset by the end of 2025, reverting to 2017 laws, absent action by Congress before then.

How They Work: Instead of being taxed at a single rate, income gets to ride through brackets at varying rates.  So, for most filers, the first dollar of income is taxed at a lower rate than the last.  The amount of income each bracket will carry before moving up to the next bracket depends on your filing status (i.e., single or married).

What Could Change: The chart below summarizes the current brackets and the proposed changes (denoted in bold).  These brackets are applied to the number shown on line 43 of Form 1040. 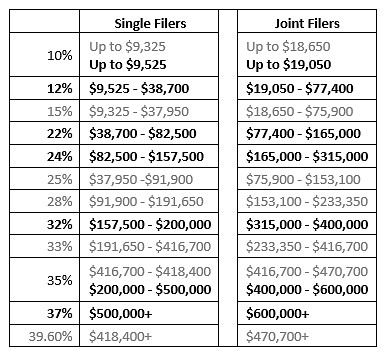 How They Work:  Deductions are essentially costs that are incurred in life that the IRS allows to be subtracted from income. There are two groups of deductions: those taken to arrive at adjusted gross income (AGI) (line 37 of Form 1040) and those taken to further reduce AGI to arrive at taxable income (line 43 of Form 1040). Deductions taken to arrive at AGI are referred to as “above-the-line” deductions. Those taken to further reduce income are referred to as “below-the-line” (AGI, line 37, being the proverbial line, of course).  Exemptions are like little gifts from the IRS, allowing most taxpayers to avoid tax on a small amount of income each year. Currently, an exemption of $4,050 is allowed for each tax filer, plus dependents.

Capping the amount allowed for state and local tax deductions to $10,000 choice between your choice of income tax, property tax and/or sales tax,

Capping the mortgage interest deduction to the first $750,000 of indebtedness for new purchases, and

How it Works: Credits are the best way to reduce tax, because they are a dollar-for-dollar offset against tax liability. The Child Tax Credit is one of many and provides taxpayers with a $1,000 credit for each qualified dependent child under the age of 17.  The credit amount may be reduced or entirely disallowed if income is above a certain threshold.